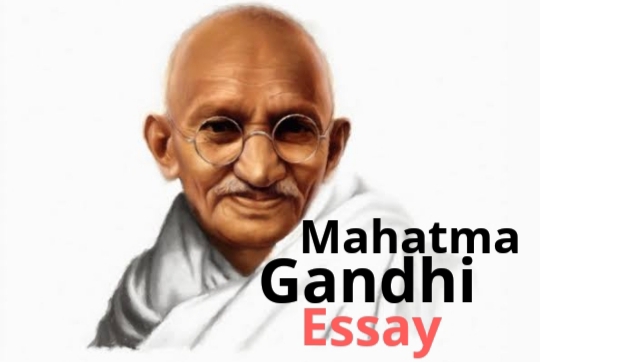 Mahatma Gandhi‘s entire life is one of sacrifice, spirituality, dedication, non-violence, and patriotism. When anyone who is a student, he should have enough knowledge about writing an essay on Mahatma Gandhi.

Students have to deal with this type of essay writing about the individual. It requires knowledge of a person’s entire life. This type of essay does not require much elaboration. Syntax and layout are essential.

His birthday, October 2, is celebrated as “World Day of Non-Violence”. His whole life is marked by spirituality. His study of various religious texts was useful for him and for the society as he was able to maintain interfaith harmony.

The effect of that spirituality is seen in their entire life. Such qualities as non-violence, tolerance, compassion, integrity are found in his life. The characters Shravanbal and Raja Harishchandra in ancient stories had a profound effect on the mind of Mohandas.

Gandhiji’s primary education was in Porbandar and his secondary education was in Rajkot. He was a brilliant student in academic life. He passed the matriculation examination from Shamaldas College in Bhavnagar. Mohandas Gandhi was married to Kasturba Makhanji at the age of thirteen. Later they had four children. His children’s names were Harilal, Manilal, Ramdas, and Devdas.

Gandhiji united the farmers of Champaran to fight against oppressive taxes and landlords. Later After taking over the reins of the National Congress in 1921, he started a nationwide movement. These included important policies such as interfaith equality, economic self-reliance, rural development, women’s rights, and poverty alleviation.

Later In 1930, in protest against the salt tax imposed by the British, he just walked about 400 km. Thousands of Indians participated in this movement named Dandi Yatra.

He was always striving for the salvation of the Harijans. At Sabarmati Ashram, he served Harijans, tribals, and lepers. He considered cottage industries more important than large factories. He accepted simple living as an indigenous reward. He changed his clothes and diet. They liked cleanliness and simplicity.

In 1942, he started the “Leave India” movement against the British. The nature of each of their movements was non-violent. So they often went on a hunger strike. All over India, people of all faiths and leaders were his followers. Some extremist leaders opposed Gandhiji but that opposition was political. Personally, those leaders also respected Gandhiji. Later, on August 15, 1947, everyone agreed that he had played an important role in independence.

He was always insistent on the freedom and rights of the people. He endured imprisonment many times in his own life. He was aware of the injustice done after the partition of India and Pakistan. Gandhiji was constantly striving for self-purification and body purification. He faithfully adhered to the two principles of truth and non-violence throughout his life. On January 30, 1948, the Mahatma merged with Infinity.

So, I hope you like this Mahatma Gandhi Essay. If you have any queries about this topic or our essays please comment bellow. We will definitely back to you. Your suggestions mean to us. If you want other essay topics then click on the bellow links or visit our Essays category. thank you.