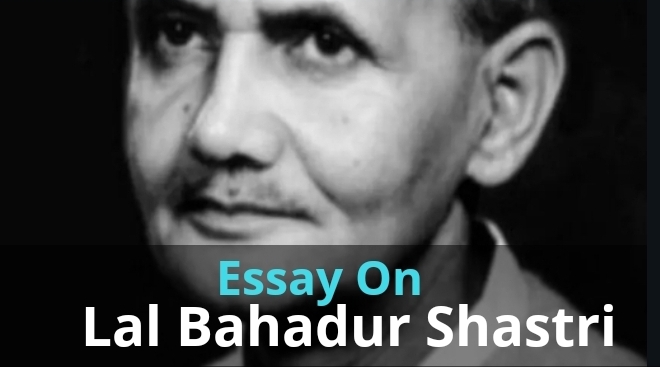 Lal Bahadur Shastri was the second Prime Minister of independent India, a great patriot and freedom fighter. “My favorite leader”, In this genre, is to mention important events and happenings in that person’s life. This type of essay needs to be written in school while a student. It is expected to write an essay on such a subject. Let’s see how to write an “essay on Lal Bahadur Shastri”!

Lal Bahadur Shastri, a great Indian freedom fighter, activist, patriot, and the second Prime Minister of India, was born on 2 October 1904 in the Mughalsarai railway colony near Banaras. His mother’s name was Ramdulari and his father’s name was Sharada Prasad. His father was initially a teacher and later became a government clerk. His father died when Lal
Bahadur was a kid. His family then settled at Ramnagar near Banaras.

He joined the “Servants of the People”, an organization founded by Lala Lajpat Rai. In 1927, he married Lalita Devi. They later had four sons and two daughters. His wife was religious. While living in Allahabad, Lal Bahadur Shastri was guided by Pandit Nehru. At the social level, he worked in many organizations and government offices. Members of the Executive and General Secretary etc. Positions also held.

He was arrested seven times during the independence movement. He was sentenced to a total of nine years in prison. When he was arrested in the 1942 movement, he imprisoned, he studied Kant, Hegel, Russell, Huxley, etc. the texts of thinkers. In 1946, he was elected to the Uttar Pradesh Legislative Assembly by the Congress party. In Govindpant’s cabinet, he was given the Home and Transport account. Pandit Nehru made him General Secretary of the All India Congress in 1950.

He witnessed the selection of Congress candidates in the first elections of independent India in 1952. Seeing Lal Bahadur Shastri’s partisanship and work ethic, Pandit Nehru made him a member of the Rajya Sabha and made him the Minister of Railways and Transport in the Union Cabinet. He resigned as Railway Minister in 1956, accepting moral responsibility for the tragic Ariyalur train accident in Kerala.

He was re-elected to the Lok Sabha in 1957. He served in the Union Cabinet from 1957 to 1964 in the areas of Communications and Transport, Industry and Trade, Home Affairs, etc. Accounts handled properly. Jawaharlal Nehru demanded the resignation of his colleagues to purify the administration by implementing the Kamaraj Yojana. Six ministers, including Lal Bahadur Shastri, resigned at the time. Nehru then included him in the government as a minister without accounts.

After the death of Pandit Nehru, the Congress Parliamentary Assembly unanimously appointed Lal Bahadur Shastri as the Prime Minister on 9 June 1964. The decisions are taken while he was the Prime Minister shows his ability. The real test of his leadership came in the Indo-Pak war and skirmishes. Ayub Khan and Shastri signed the nine-point Tashkent Agreement on January 10, 1966, in Tashkent negotiations between India and Pakistan, mediated by Russia. Shastri died of a heart attack on January 11, 1966, at midnight.

He was posthumously honored by the Government of India with the Bharat Ratna. Excellent workmanship, organizational skills, and mental toughness are evident throughout his life. His slogan “Jai Jawan, Jai Kisan” is just as famous today. The service rendered by Lal Bahadur was always right. Worked in many social service organizations without pay or for a small fee. So they had to live a life of poverty for the rest of his life. His emphasis was on simple living and peaceful life rather than wealth. Organizational skills and social nature are two qualities that can be shown throughout his life.

So, I hope you like this Essay on Lal Bahadur Shastri. If you have any queries about this topic or our essays please comment below. We will definitely back to you. Your suggestions mean to us. If you want other essay topics then click on the bellow links or visit our Essays category. thank you.