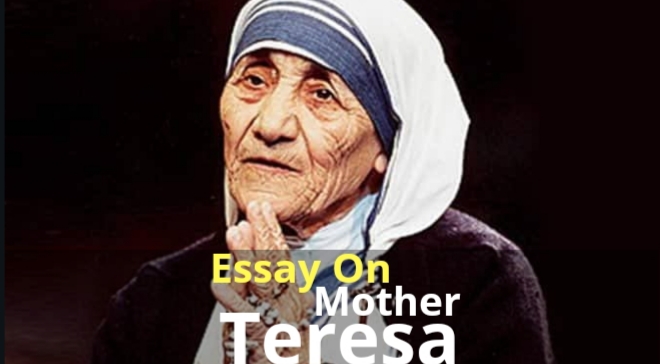 Mother Teresa was a great social worker. She has been awarded the Nobel Peace Prize, the Bharat Ratna, and Padma Shri. In order to know about such a great woman, students have to write an essay on her life in school life. This essay should be presented properly. Life events and deeds have to be written in a realistic way. Let’s see how to write an essay on Mother Teresa.

Mother Teresa’s full name was Anjezë Gonxhe Bojaxhiu. She was born on August 26, 1910, in Skopje, Macedonia. Her father’s name was Nikollë Bojaxhiu and his mother’s name was Dranafile Bojaxhiu. Father Nikollë died when Anjezë was just 8 years old. With the untimely demise of the father, all the responsibility fell on the mother.

Mother Teresa’s mother was religious. He used to go to church regularly for prayers. Anjezë used to go to church with her mother and sister to sing religious songs. The rites of religious and social service of the mother were taking place on a small fire. At just 12 years of age, she was influenced by Jesus’ social and philanthropic teachings. She decided to pass on the same teaching.

A few years later, Anjezë came into contact with the nun community, the Sisters of Loreto. She was only 18 at the time. Anjezë left home to go to Ireland to continue her social work. Learning the English language was mandatory as all education and propagation were done through the English medium. So when she went there, she learned English. She then completed all the training to become a nun from an institution. After that training, she was named “Sister Mary Teresa.”

Essay On Mother Teresa in 600+ Words

After becoming a nun, she decided to devote her entire life to serving the poor and helpless. Mother Teresa came to India in 1929 along with some other nuns. In Darjeeling, she took her first vow as a nun.

She was then sent to Kolkata as a teacher. St. Mary’s School was founded in Calcutta by Sister Lorento of Dublin. In this school, Mother Teresa taught poor children. In a very short time, she became the favorite teacher of all the children. She did her best to teach.

Mother Teresa was extremely sensitive. In Kolkata, at that time people were suffering due to drought and poverty. Mother Teresa was devastated. She then decided to spend his entire life in the service of the poor, the sick, and the helpless. As a result of this decision, Mother Teresa completed her nursing training at the Holy Family Hospital in Patna.

She came to Kolkata again in 1948 and devoted herself to the service of the poor and the victims. Later in 1950, she founded the “Missionaries of Charity”. The purpose of Mother Teresa’s organization was simply to help the poor, the sick, and the victims and to instill in them the hope of survival.

In addition to this organization, she also established an ashram. The ashram treated poor and sick patients and helped orphans and homeless children.

The Government of India honored her with two awards, the Padma Shri and later the Bharat Ratna. She was later awarded the Nobel Peace Prize in 1979 for her outstanding work for human welfare. She was also awarded the Medal of Freedom in 1985.

Her health deteriorated in his old age. She suffered two heart attacks in 1983 and 1989. Even in this adverse situation, she continued her social work. In 1997, Mother Teresa retired as head of Missionaries of Charity. Later, She passed away on September 5, 1997, and merged into Infinity.

So, I hope you like this Essay on Mother teresa. If you have any queries about this topic or our essays please comment below. We will definitely back to you. Your suggestions mean to us. If you want other essay topics then click on the bellow links or visit our Essays category. thank you.