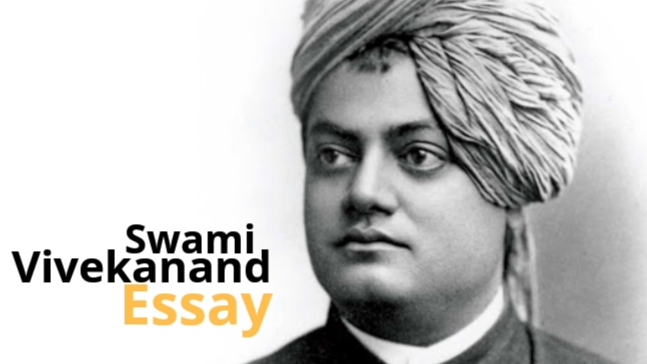 Swami Vivekananda was a wonderful personality. Writing an essay on his life and his accomplishment helps students understand swami’s life. They also understand his piety and logic. While writing this essay, one has to make a concise and historical explanation without elaborating on the ideas. Let’s see how to write an Essay on Swami Vivekananda!

Swami Vivekananda was a great Indian ascetic who had a vivid and intense personality, expanding and spreading Hinduism and spirituality in a very scientific way. At Simlapalli in Kolkata, Swami Vivekananda was born on 12 January 1863. His full name was Narendranath Vishwanath Dutt.

His father Vishwanath Dutt was a lawyer in the Kolkata High Court. Mother Bhubaneswari Devi was religious. Narendra was interested in philosophy, history, art, and literature since childhood. It was as if they were passionate about the scriptures and the truth behind them. He also loved music when he was a child. He also took formal music lessons from Beni Gupta and Ahmed Khan.

Narendranath received his early education at home. Then in 1871, He entered into Ishwar Chandra Vidyasagar’s Metropolitan Institution and passed the entrance examination of the Presidency College in 1879. He later enrolled in the General Assemblies Institution. He studied logic and western philosophy. In 1881 he did his Fine Arts and in 1884 he got his B.A. Education.

Essay On Swami Vivekananda in 600+ Words

Swami Vivekananda was a very rational and thoughtful man. He studied the writings of great personalities such as David Hume, Emmanuel Kant, Baruch Spinoza, George Hegel, Herbert Spencer, John Stuart Mill, etc. during his academic and later years. He was fascinated by the evolution of Herbert Spencer. He also translated Spencer’s book ‘Education’ for Gurudas Chattopadhyay, a Bengali publisher.

Along with Western philosophy, he also studied ancient Sanskrit and Bengali texts. He was known as ‘Shrutidhara’, a man with an extraordinary memory. His reading speed was very good. He would finish a book much faster than a normal person. What changed the life of this extraordinary Narendra in the true sense was after the visit of Ramakrishna Paramahansa!

In November 1881, Ramakrishna first met Narendra and recognized his talent. Guru Ramakrishna believed that this person of sharp intellect could certainly reach a higher peak in the spiritual realm. Swami Vivekananda stayed with Ramakrishna as a disciple for spiritual upliftment and propagation. Narendra was progressing day by day due to spiritual practice and association with Guru.

The work started by Ramakrishna Paramahansa was to be entrusted to Narendra. Later, Ramakrishna initiated Narendranath into asceticism and renamed him ‘Swami Vivekananda’. “Ramakrishna Math” was established by Swami Vivekananda after the Mahasamadhi of Shri Ramakrishna with the help of one of his Gurubandhu Taraknath in the area of ​​Varahnagar near Kolkata.

After Ramakrishna’s Samadhi, Swami Vivekananda set out on a tour of India. After touring India, he understood the miserable condition of India as well as the whole world. He then resumed his mission. This time he also went abroad. An interfaith conference was held on September 11, 1893, at the Art Institute of America, Chicago. Vivekananda had gone to that meeting.

There he began his speech with “My Brothers and Sisters in America,” and all who
gathered for the meeting began to applaud. In this conference, Vivekananda, while representing Sanatan Dharma, gave lectures on Vedanta and Indian culture. He asserted that the essence of all religions in the world is the same.

He later gave lectures on Vedanta and Yoga in the United States, England, and some European countries. He founded the Vedanta Society in the United States and England. On July 4, 1902, He took samadhi at Belur Math near Kolkata. His philosophy has always been and will always be memorable. His message “Get up, wake up, don’t stop until the goal is achieved” is very famous today. Such a great yogi, ascetic, philosopher, by his own deeds, illuminated the whole world.

So, I hope you like this Essay on Swami Vivekananda. If you have any queries about this topic or our essays please comment below. We will definitely back to you. Your suggestions mean to us. If you want other essay topics then click on the bellow links or visit our Essays category. thank you.