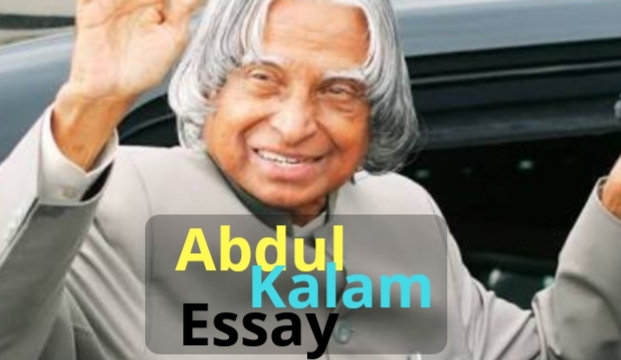 APJ Abdul Kalam Essay: Dr. A.P.J. Abdul Kalam’s whole life is a fire pit dedicated to science, country, and society. Students should get to know this great man who dreamed of making India a superpower. Writing essays on the life of the persons like this is an activity carried out by the students.

When writing an essay on any person, it is necessary to have complete information about that person. The subject of the essay should not be made fictional. Important stages and things in a person’s life should be described.

The eleventh president of India, the scientist known as Missile Man, Bharat Ratna Dr. A.P.J. Abdul Kalam was a very famous personality. His full name is abul pakir jainulabdeen Abdul Kalam. He was born on 15 October 1931 in Rameswaram, Tamil Nadu. His birthday is celebrated as World Student Day.

A.P.J. Abdul Kalam was an aeronautical engineer. He was a man of sharp intellect when he was a student. Higher education was not possible due to poor living conditions. He completed his secondary education at Schwartz High School, Ramanathapuram. He then graduated from St. Joseph’s College, Trichanapalli with a degree in Science. He was very interested in aerospace technology.

In 1963, he started working at the Indian Space Research Organization (ISRO) in the field of missile development PSLV ( Polar Satellite Launching Vehicle). It became very famous due to the successful test of the “Agni” missile. He came to be known as Missile Man. As the Prime Minister’s Scientific Adviser, he pursued a number of important policies. Later, as Minister of Defense, Scientific Adviser and Head of DRDO, he played a key role in the development of both the Arjuna (main battle tank) and light combat aircraft.

Kalam, who is becoming famous as a leading scientist in India, was very simple and sensitive by nature. He served as the 11th President of India from 2002 to 2007. Dr. Kalam was unmarried and vegetarian. They didn’t even have much wealth. He dreamed of making India a superpower. His thoughts and speeches were very dear to the youth. It was an inspiration to Indians as well as youth around the world. The Government of India has honored him with ‘Padma Bhushan’, ‘Padma Vibhushan’ and ‘Bharat Ratna’.

After taking over the presidency, Kalam started working as a visiting professor in reputed universities in India. He dealt with research and technology, information technology. His scientific lectures are very famous. Dr. A.P.J. Abdul Kalam’s life has been an inspiration to the entire Indian youth. This missile man merged with Infinity on July 27, 2015.

So, I hope you like this APJ Abdul Kalam Essay. If you have any queries about this topic or our essays please comment bellow. We will definitely back to you. Your suggestions mean to us. If you want other essay topics then click on the bellow links or visit our Essays category. thank you.