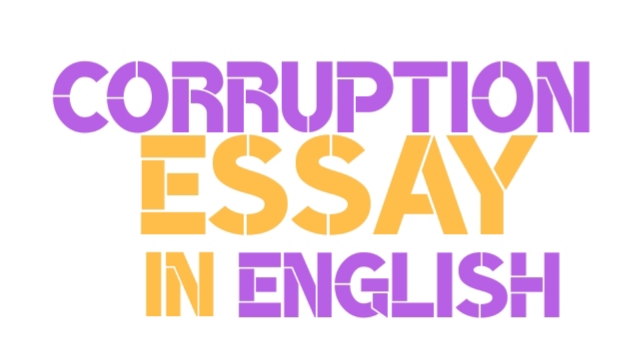 Corruption is not a new problem. Its roots are deeply rooted. It can be said that the uncontrolled system and the selfishness created by it is the cause of corruption. To understand the concept of corruption, students are asked to write essays on the topic of corruption in school life.

Students should not exaggerate when dealing with this subject. This essay aims to raise important issues by making a proper assessment of the governmental and social system in our country and state. Let’s see how to write an essay on corruption!

We are constantly hearing the word corruption. How will the construction of corruption in our country and in the state? This problem is the nature of the social system that individual factors are also responsible for it. They should be considered in detail. There is also a need to think deeply about how society and the individual can stay away from corruption.

Corruption is constantly coming to our notice through news channels and newspapers. Corruption is not a big issue for us as it does not reach the individual level. But sometimes when you start bribing yourself in a system or an organization, you realize how terrible and big this corruption can be. Corruption is easily found in the governmental and social systems that are in place today.

The necessities of life are readily available, but human selfishness is at an all-time high. The vain competition for survival and the desire that arises from it is the cause of any kind of corruption. Corruption, whether moral or financial, has to be faced by all. Corruption is not diminished by the superficial bribery laws and by punishing a person because the morality
of the corrupt is corrupt.

Let’s first look at how many places a person is bound to in the social system today. Man’s need to eat and live is basic. He works for it and earns money. The freedom he gets from that money seems to be permanent and money seems to be his life. Then he is ready to go down to any level to get money, wealth, then corruption starts!

Government systems work for these people but do such systems really work in the public interest? They are trying to get money from the people and from the government coffers. People trust them because they are governed by laws and regulations. People just pay into the system because they don’t even know how much financial supply is needed for the system.

Trivial facilities are provided at the beginning but then only the money is boiled down. What people don’t realize at this point is that they have to lose a lot of money for a small profit. That system, the system is making a lot of money through such corrupt policies. Then the benefit of such a system comes to the notice of the people as corruption. Government systems like transport, banking, education, industrial factories are all for the people but sometimes they are neglected and corruption starts.

Now the private sector is growing rapidly. Confidence in government institutions is declining. People rely on everything being analyzed in the private sector. But government agencies expose scams by enforcing laws and regulations on such private entities. Private companies then pay a portion of the profits to the government. In this way, both the private and public
sectors exploit people.

Any system or mechanism that benefits people should have a noble purpose. Human development and progress must be enhanced not only economically but also morally. Only then can corruption be reduced or in the future, we will fall prey to one or more systems and we will not be able to raise our voice against it.