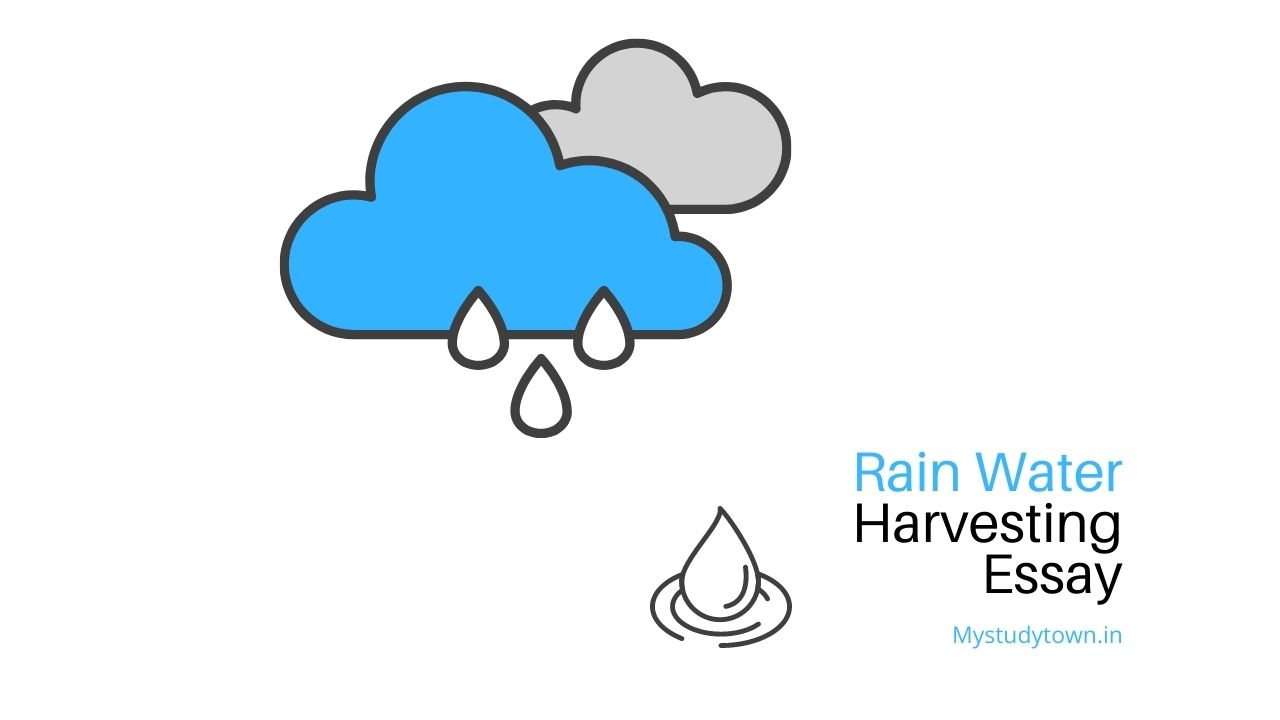 Hello Students, Today we are coming with another essay topic. And that is Rain Water Harvesting Essay in English. It is helpful for all school students and competitive exam aspirants. So let’s start…

It is no surprise to admit that water is the finest of natures endowments that we have on earth and yet we remain unthankful to this heavenly gift. We have polluted and misused every bit of the water on our planet to such an extent that the quote Water, water, everywhere and all the boards did shrink: water, water everywhere, nor any drop to drink ”; seems to come true. Water covers two-thirds of the surface of the earth, but fresh water is merely 0,002 per cent on earth.

Rainfall, therefore, significantly affects the agricultural production of the country by providing water for two main crop growing seasons- Kharib (summer) and Rabi (winter). Variations in the monsoon rainfall affect the total food grain yield of India and also the economy of the country, which is largely dependent on agriculture. The Asian monsoon climate is significantly dominated by Indian summer monsoon rainfall. Not just this, every year more than 80% of the annual rainfall is received over only the Indian land grid points. But, factors like climatic changes at national and global levels are leading to falling in water levels and this further gets burdened by overpopulation, causing the depletion of our water bodies.

The Value of Water Harvesting

The value of water is known to mankind from the time of Indus Valley and Mesopotamia civilization as the cities flourished around the river water. In places where the rainfall was erratic and less, like in Deccan and desert regions, various tanks were built to store water for dry spells. World 1 leritage sites like Rani ki Vav in Gujarat is a prime example of step wells which were built in the drier regions of India.

Steps are also underway to restore various tanks in Telangana region built by the Kakatiyas to make storing and managing of water efficient and also use the natural and ancient wisdom to restore the water balance in the ecosystem. Rainwater harvesting seems to be the solitary option which is practically feasible in countering the growing menace of rapid water depletion.

It is the technique used for collecting, storing and using rainwater for landscape irrigation and other uses. Trapping rainwater from roofs and directing it into underground storage tanks is a good practice for residential areas. It can satisfy 50% of a regular family’s water needs.

Rainwater Harvesting has been the most important tool in utilizing the rainwater for replenishing the underground water table, ibis practice has become widely accepted and is followed in big industries and big buildings as well. This is practice creates security against erratic monsoon and also protects the top layer of soil from getting washed away this not only secures us from water scarcity but also takes care of food security as well.

Thus, soil management and water management are interlinked and success of one will ensure the success of other. Not just this, rainwater harvesting is also equally beneficial for large manufacturing units having the requirement of large volumes of water. Liven for low-lying regions prone to Hoods due to over-taxed drainage systems; this process is the perfect solution.

Using rainwater harvesting systems, allows groundwater levels to recharge. This in turn helps in augmenting urban greenery. Besides all this, it also makes a good reservoir for irrigation purposes. By installing gutters and a filtration system, storage tanks can be filled with rainwater and later used for non-drinking purposes; the primary being irrigating plants and fields.

The best way to collect rainwater is through roofs as it has least amount of pollutants and also involves low cost of conversion. Elevating the gutter allows the water directing to tank without pump. It also remains easy to pre-filter. Using rainwater as a supplemental source of water for landscape irrigation system is a boon for farmers in drought-prone regions.

It employs low equipment cost as well. Besides this, it diminishes flood, erosion, and flow to stormwater drain by reducing peak stormwater runoff. As stored rainwater is free from pollutants as well as salts, minerals, and other natural and man-made contaminants, it leads to improved plant growth.

Combining Traditional Knowledge with Scientific Ways The temples of modern India the dams have created many opportunities for Hood control and irrigation but along the way the repercussion** have been devastating for people. Many villages have submerged and people had to be relocated. Frequent flooding due to silting in dams like in River Kosi due to the kanaka barrage has been highlighted m recent times. Dams have a way of changing the course of rivers and this intervention has had a lot of social, environmental, financial, and human costs.

Our ancient culture is based on peaceful coexistence of humans with the natural resources. As stated by
Oandhiji that ‘world has enough for need but not tor greed’, water the elixir of life- which scientists try to
find in different planets will cease to exist in our own green and blue planet. This grave situation can only be tackled when the rampant use of water in an unsustainable way is stopped and along with that there
is revival of old structures to hold water.

There is a connection between our feeding patterns and water
availability and with change in water quantity this will change and create disruptions in ways of life which people are accustomed to for past many years. Thus, we need to manage water well and any plan should be inclusive of various stakeholders to be successful and finally allow people to live on earth a happy life.

I hope you like this “Rainwater harvesting essay.” If you have any queries about this essay then let us know. pls, do like and share with your friends. Thank you!!!