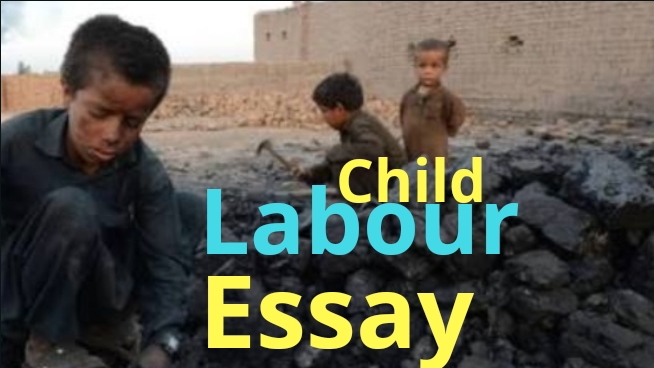 Child Labour Essay: Child labour is one of the biggest problems in the last decade and even now! Now it is declining but in some places, it is deteriorating. The dark future that comes when you start working as a child is not good for some social and alternatively for the country. To understand this, students have to write an essay on child labor.

Many countries like India were on the path of development in the last century. At that time family planning and a sense of patriotism were just developing. His relationship was not overall the countrymen. In rural and semi-urban areas, education was not a means of subsistence as there were no means of subsistence, and parents were not educated at home. When agriculture was not available, the option of wages was accepted.

Under such circumstances, even the youngest children in the household were used for hard labor. If all the family or acquaintances were doing some hard work, even the children in the house would be taken to work for a little money. The experience that children are being pushed into the darkness of wages is slowly coming to a place where it was very important for children to be educated for the progress of the country.

Indian culture was being forgotten as foreign powers continued to invade the country. Ever since independence, India has once again stood firm. For this, every Indian must be educated and stand on his own feet. He should understand the development of himself and the country. But what is most needed for this to happen is to eliminate child labor and bring young children into the mainstream of education.

Any country becomes great with its responsible citizens. The process of creating a responsible generation starts from childhood. Everybody becomes a better citizen if education and then industry opportunities become available but still child labor is seen in some places. This child labor is not good for the country and the society. On the one hand, some children are highly educated. They make a name for themselves in the fields of arts, sports, business, etc. On the other hand, some children are making their future dark with child labor.

If one generation is sensible, the next generation can think beyond that. Such a path of progress should be everyone’s choice. The future of young children cannot be determined by hard work and hard work as a child. How can they choose the path of progress? That much intellectual development needs to happen at an early age.

We have to give something to society after meeting our own needs. By donating, we realize that we are creating a bright future. How can the concept of child labor, society, and country be inculcated in the mind? If he doesn’t know the alphabet and only works all day, then the rites will be on him for the rest of his life. If a child receives the injustices and treatment of laborers at an early age, how will he view the welfare of others?

He will do anything for personal gain and money. All the addictions that laborers have will be attached to him at an early age. Eating tobacco, gutkha, drinking alcohol will become his daily routine. Once a child laborer grows up, it is difficult to educate him. Instead of trying to recover, they wallow in their sadness and thus, experience more failure. Even people who come in contact with him will not be happy to have him.

Will his next generation, even his children, wait for education? This point is worth considering. Every country is now thinking about this. By enacting the Child Labor Act, the government provides that children will not have to work hard and their education will be spent. This issue is raised in every government policy.

India is a land of spiritual and universal truth. India has a culture that will inspire the whole world. We should not distort it in the future. For this, children must be freed from oppression and child labor. Today, child labor is rare, but its prevalence in some areas should be eradicated. Child labor is found in hotels, construction companies, private factories, and public enterprises. If so, bring it to the notice of the government and become an informed citizen.

So, I hope you like this Child labour Essay. If you have any queries about this topic or our essays please comment bellow. We will definitely back to you. Your suggestions mean to us. If you want other essay topics then click on the bellow links or visit our Essays category. thank you.