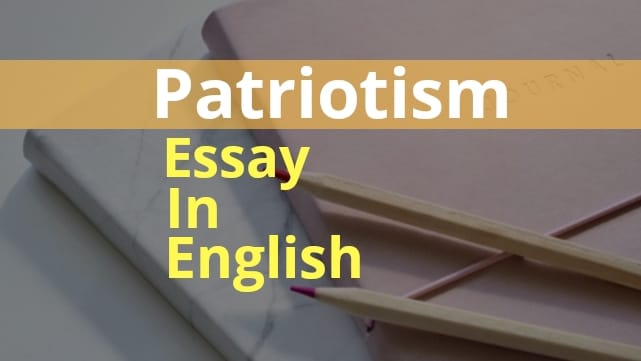 To understand why and how to cultivate patriotism, one has to write an essay on the subject of patriotism. In order to inculcate patriotism, social sensibilities in life have to be enhanced. For this, students need to try at an early age. Let’s see how to write a patriotism essay!

Why should patriotism only erupt on Independence Day and Republic Day? We must have respect for the land in which we live all our lives, as a society together. When the country is determined not only on the borders but also on the capabilities and deeds of the people there, then we will understand the concept of patriotism.

Independence was very violent. Not only the British but also the previous invasions of India by foreign powers were intolerable. The result was independence in 1947! The struggle for freedom and the loss of lives by many martyrs are indicative of this freedom. Therefore, India is not a region made up of a few states, but a country with an unbroken bond.

Indian culture is very ancient. It is our responsibility to maintain it after independence. Also, India is once again a country looking to develop with new hope. It should be inculcated in the minds of every Indian that India is striving as an integral country for human development, both spiritual and scientific. It is also necessary to introduce what duties have to be performed as a patriot.

Patriotism should not be limited to any one day but should be embraced in the social sphere as a wise citizen throughout one’s life. The emphasis has been on education and politics in building the country since independence. Yet it is only at war, cricket matches, politics that we become patriotic. Everyone’s definition of patriotism should be examined to make patriotism an integral part of society.

The issue of security in India developed a lot after independence. The security of the country at the border and along the coast was considered very important. Domestic rules and laws were enforced. It was the first duty of every countryman to abide by it. Now we need to go even further.

Our emotions are aroused by the things we say or are taught to be our own. You don’t have to teach them safety and care. Also, if we plan for the country, we can instill patriotism in the people. This will eliminate internal conflicts and bring about social stability.

The country is growing by the people there. Therefore, every child, a young man must be committed to the bright future of India. If moral values increase in a person, then patriotism will not need to be taught any differently. We should try to solve the social problems of the country without having a violent feeling that another country is our enemy and we should come together to oppose them.

In a constructive direction, for the dream of a brighter India, while cultivating social and moral values ​​and becoming an inspiration for other countries, all the people of the country should come together with a spirit of patriotism for the development of the country by overcoming internal strife. Then that personal and social life can be called true patriotism.

How did you feel about the patriotism essay? Be sure to leave your feedback on this. Let us know in the comments box if you have any comments.