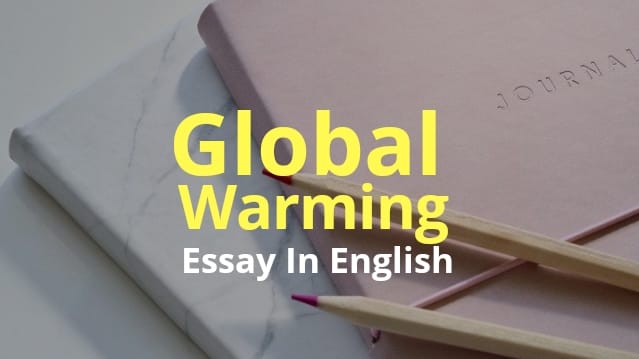 Global warming has been a problem for the last two decades. The balance of nature has been upset in the name of industrial and scientific progress. Students need to do a proper analysis of this problem in the Global Warming Essay.

Essay on Global Warming for Students|

Global warming is now a global problem, and tropical countries are suffering the brunt of it. Everyone knows that the temperature is rising, but who is taking care of it? What could be the side effects now and in the future? How many government policies are successful in that regard? We have to think about all these things to understand the concept of global warming.

The problem is the obstacle in life! Difficulty in living a free or healthy life! Warming is an environmental problem. Because the temperature in the atmosphere really rises, what could be the causes, effects, and remedies? An in-depth discussion is expected.

Walking outside in the open air today was exhausting. Wool and pollution are detrimental to health. Skin diseases, eye diseases, headaches, heat stroke are the most common diseases affecting human beings. The problem of temperature rise has been dragged down by humans themselves, who have only a scientific approach and show that we have improved, without expecting a clean environment and nature.

Growing population and increasing industrialization to feed that population and meet their needs as well as excessive use of vehicles, technology as a result of all this increasing pollution! The primary causes of such different types of global warming can be given. Man is also claiming his own development in destroying and polluting natural resources. As a result, life, which is possible, has been affected by global warming.

The ozone layer is depleted as a result of rising temperatures and pollution. The ozone layer blocks the UV rays from the sun and protects the earth. Due to the deficiency in this layer, the sun’s ultraviolet rays fall directly on the earth. So life is hot and global warming is on the rise. Trees, which are useful in reducing heat and pollution, are being cut down, further increasing the temperature. We see so many deaths each year from heatstroke.

Measures such as stopping deforestation, planting new trees, minimizing the use of vehicles, and streamlining transportation can be taken as measures to increase the temperature. At the same time, if population control is the goal, then a man will not invade nature.

Man is being dragged into the competition of material pleasures just by dreaming of a better future. Man has been cultivating the seeds of ambition and selfishness since childhood. As a result, the balance of nature is deteriorating as a result of incessant running and lust, and like other problems, global warming is also becoming a new problem.

How did you feel about this essay on Global Warming? Be sure to leave feedback on this. Let us know in the comment box if you have any comments …