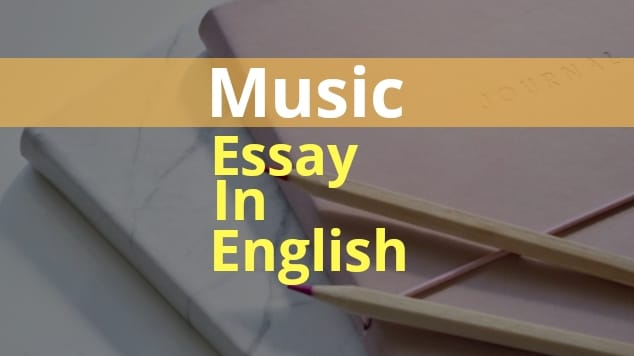 Music is a precious art. Students need to take special care while writing essays on the subject of music. Extensive knowledge is required when composing sentences. One has to write an essay by knowing enough information about music experience, its types, singing, playing. Let’s see, how to write an Essay on Music!

Even if you hear the word music, the tones start ringing in your ears. Music is a beautiful confluence of melody and rhythm. There will be very few people who do not like music. We may or may not have learned music, but we keep some kind of music for ourselves.

Music is one of the most valuable arts in the world. For those who have made music their own, music is life for them. The concert begins with the accompaniment of tunes and rhythm. Everyone feels the living touch of such music.

Some types of music can be described as spiritual, classical, ghazal, folk music, art music, dance music. Modern music is full of negative emotions and lusts. In a very short period of time, the validity of the music that is created by just playing variety of sounds loudly is immediately lost.

Musicians, songwriters, singers, musicians all come together to create music. The lyricist composes the words, on which the composer sets the tone. The singer and musician then compose a song. Very modern technology is now available for recording music. Just using a computer, and even a technical instrument, one can create individual music.

Film music is a different kind of music. The film manages to entertain as well as inform. So the genre of music is starting to feel like just movie music to the modern generation. The art of dance has also survived due to film music. Therefore, various arts related to music is being accepted by the younger generation as a great career path.

In the past, concerts were held. Due to the lack of TV, mobile, technology, music fans used to respond to such programs. When an artist completes a song, the only thing he will get from the audience is his livelihood. But now In a record, We don’t feel the liveliness and emotion in any of the songs, which means that those emotions do not flow in the listener.

Western music is based on what material life is like. It does not have a very large internal base. The Guru-Shishya tradition in music in India is not found in Western culture. Energy, emotion, love, devotion, dance are all invented in Indian music.

The biggest challenge facing music in the future is its creation! Music production is being done from experience as a professional need! This should also be considered. If professional music keeps repeating itself, we will be detached from the real and living experience of music and we will not be able to have a pleasant experience in music.

Music is an energy created in peace. If the nature and direction of such energy are pure and lustless, then the moments of joy will continue to flow in life, along with the hard work in learning music, and if the art of performing music is adopted, then music will become an integral part of life. So when do you start learning such easy and melodious music?

How did you feel about this essay on music? Be sure to leave feedback on this. Let us know in the comment box if you have any comments …