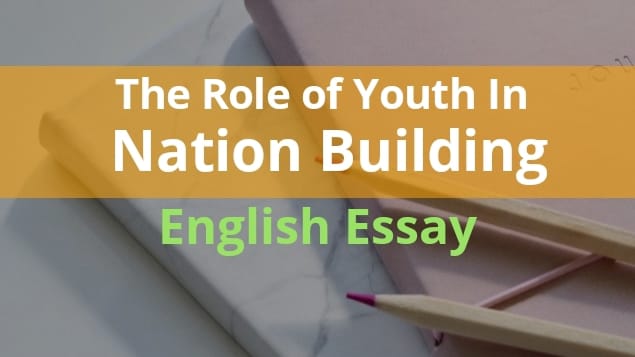 The majority of India’s population is young. If this country, which has a majority of young people today, continues to live without a purpose, then the nation can be taken away instead of being formed. This essay aims to discuss in detail the role of youth in nation-building and the direction in which efforts need to be made. Let’s see how to write this essay on the role of youth in nation-building!

The Role of Youth in Nation Building | English Essay |

Any nation is made bigger by its advanced and intelligent people. Only those who hope for developed human qualities can create history and nation. Nation-building requires a great deal of effort. Such efforts are made by strong and young hands. For this, if the youth of a nation are motivated by the spirit of the nation, nation-building can be easy and lasting.

If we look at the history of the human race, the young man seems to be caught up in either lust or violence. The people who were ruling, aggression, war were violent, they used their youthful energy in a violent way. Also, in every century, those who felt the need for revolution seem to have taken advantage of young energy.

Many young people lost their lives for India to become independent. But then the real challenge is in building a post-independence nation! Today, more than seventy years later, did the efforts of some great people and leaders to elevate India succeed? Was the path chosen for this use in the formation of the country after independence? In what direction and inspiration did the youth continue to move?

You have to look at the current situation while answering the above questions. In today’s age of science, we have to think about how the concepts of society, state, nation can survive. Young people use science and technology a lot but they lack intimacy with the society and country in which we live.

The goal of young people devoting their lives entirely to the nation will no longer be achieved because the country is no longer enslaved. In a country that now has a legal system to run, a strong nation can stand if the youth can function properly. Every country has a different way of running the country. In India, such a system is called democracy.

In a democracy, a government elected by the people works. That government determines the lives of people under various rules and regulations. The government implements all types of mechanisms such as travel, environment, transportation, business, security, rural system, urban system, the supply of essential commodities, and their planning. To run such a system is to build a nation.

The government gives the opportunity to the capable youth to do government work. Young people tend to get jobs in government jobs as they tend to do for a living. So you will know that youth is the future not only of India but of every nation. The role of youth in nation-building can only be clarified if the participation of very young people in running the nation
is in the rule of law.

The young man alone cannot participate in nation building by working as he pleases, but he needs a system that will give him the freedom to work and develop while meeting his needs. Therefore, it is necessary to reconcile the law and order system of the nation and the dream and culture of the people.

If the dream and goal of nation-building are set with the bright future of the people in mind, then the youth of the entire country can be used for that purpose. We can then build a nation by educating the youth in such a way, by providing them with new job opportunities. The participation of the youth and their dream is determined by the surroundings and the society, so it should be kept in mind that today’s youth will be tomorrow’s society.

Today’s generation is involved in human art, sports, science, education, agriculture. So they should be given such an opportunity. The dream of the youth should not be to have fun, to be addicted, to be selfish by ignoring social issues. Young people should strive for the betterment of society and the nation by developing human qualities.

The wealth of every nation, not just India, is the young generation. At a young age, when the children are young, they should make radical changes in the education system and keep in view the bright and advanced dream of the future. The role of every youth should be to make life self-reliant and to constantly strive for nation-building by experiencing freedom in life.

What do you think about this Essay “The Role of Youth in Nation Building.” Be sure to let us know about that. Please write a comment if you liked it…Thank You!