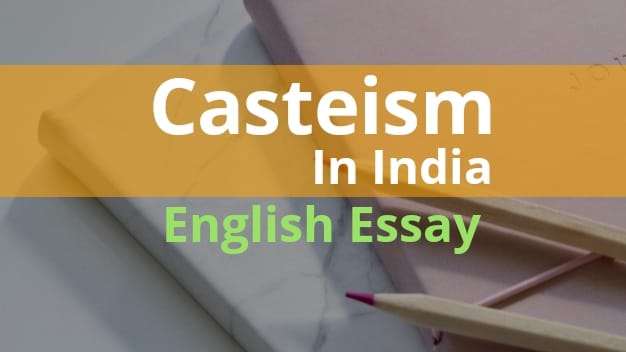 Casteism has existed in India since ancient times. Students need to write an essay on racism/casteism in India to understand why racism originated, its origins, its need today, its advantages and disadvantages. Casteism essay is meant to discuss all the racist reasons and factors without presenting its own detailed ideas. Let’s see how to write an Essay on Casteism in India!

In India, people of almost all religions and castes live together. Each caste and religion has a different foundation and way of life. No one attacks anyone’s caste, but if social stability deteriorates, racism erupts. Violent, political, and so-called religious people spread it in a very wrong way and it creates dissatisfaction in society.

Casteism in India is a very hot topic in the current situation. With the explosion of the population, every society is growing and they want to live in India with an independent breath, abiding by their rights, rules, and caste boundaries. No caste wants an invasion of another religion or caste in their way of life. It is generally considered in the Indian legal system but some political parties use the media for their own selfish ends are bringing and bringing up this issue of racism.

In every generation, a person is identified by what he does. In the past, the work done for subsistence, to fill the stomach, used to determine the caste of an individual, a society. People who used to do physical work would have different jobs, but according to religion, caste and sub-caste were different. From there, when the next generation grows up, it is natural for them to do the same work and have the same identity.

The castes and sub-castes we see today were the works of our predecessors. So there is nothing wrong with it as a social and national identity. Caste is a kind of work to be done! In the past, when intellectuals were not high, education was low, this issue never came up. He was never teased by anyone’s inferior work or caste.

So politicians know the point. Their speech and planning are in the interest of the law and the public interest. But some so-called intellectuals in the society discriminate between them and use the media to raise the issue of casteism. Sometimes decisions that take into account a large population go against a low-density population, then we hear the news that “caste has been suppressed”, “injustice has been done to a particular caste”.

If you live in a society of revenge and revenge, you may fall victim to racism. If you make it a point of discussion to protect the political interests of your own party and to oppose the other caste, the other party, then, of course, you will make the opponent of that caste and then the whole society of that caste will start to feel hostile to you.

The battles between religions, disillusioned, jealousies about God never exist. They are just rumors that are spread by the media. It does not have a direct relationship with any person but if you are watching the news, you are reading the news to increase the popularity of that particular TV program. Nothing comes out of it but the common man becomes an opponent of each other’s caste.

If caste is used as a legal and national identity, then there is nothing wrong with it. Since we are running a big legal system, our first duty is to respect any caste and not to follow casteism. Living on a social level, you will constantly need some kind of identity. Therefore, respecting the culture and religion of different regions while preserving humanity can eradicate casteism, but from the heart!

Please let us know what you think of this essay on casteism in India, Write in a comment box…Thank you!